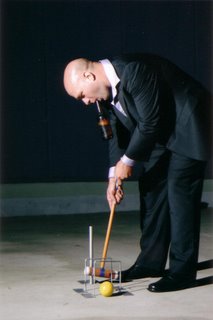 Unequivocally, Alan and I agree that the best photo from the wedding is this one of our friend Danny. Danny is an engineering mastermind who was briefly featured on a reality series about building big stuff called "The Mother of All."

I had gotten it into my mind that I really wanted people to play croquet at my wedding--but the rooftop garden doesn't allow treading upon the grass. I asked Danny to fashion a croquet set that could be used on flat ground. He was up at some ungodly hour soldering the wickets, he said, and it was well worth it. I love this noir-ish shot of him with the beer bottle in his mouth.
Posted by Erika M at Sunday, November 12, 2006