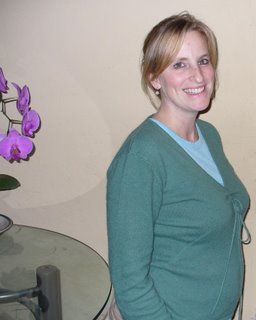 Alan and I are having a baby! On Friday, we will be at 20 weeks. He took this picture the day before Thanksgiving, when I was just shy of 19 weeks. We are now more than halfway through this pregnancy, at five months. Amazing.

You may wonder why we waited until 20 weeks to announce, when most people do this after the first trimester.

We’ve had a long, long road. We actually started trying back in August of 2003, well over three years ago. After a year and a half of infertility, we began having a series of miscarriages. It was my sister the doctor who suggested we wait until 20 weeks, just to be as sure as possible that things were going right.

And despite a slew of misfortunes that kept convincing us this baby too was not long for the world, she has persevered. She is a trooper! As of yesterday, she quickened – an old-fashioned way of saying I can feel her move. Instead of sweating out the long weeks between ultrasound or Doppler sessions, I now have her own feet and flailing hands to reassure me that she’s still… well, kicking.

Now that I’m a little more relaxed about it, I am loving being pregnant. Those kicks make me feel so close to her, and now that we know the gender we are both calling her by her name and including her in absurd, ridiculous, absolutely wonderful conversations.

Alan and I send our thoughts and love to those still in the trenches… trying to conceive, trying to make a baby stick… or possibly coming to grips with the idea that neither may be possible. We will never forget the pain that this normally-joyful journey can inflict, and we send our hearts to you.

Yay, yay, yay!!! Congratulations! Karl, Karalyn and I are so thrilled and happy for you and Alan.

Everything is turning out so perfect, don't you think? This year has been fantastic.

congratulations, mailman! excellent news. i couldn't be happier for you. you look beautiful.

in similar news, mark & jim just adopted a wee one for themselves. babies all around!

I can't remember my Blogger password but this is Donna W. and I wanted to say: congratulations! I'm so happy for you! And I love your blog.

That's wonderful. I am happy for you.

May your pregnancy and delivery be without complications.

May your child be a good eater.

May your child be blessed with a good temperament and sleep through the night.

May this child bring happiness and joy to your life.

Erika, I couldn't be happier for you. You are mighty brave and deserve all this happiness. And I can't wait to meet our new little friend!
-Gaby