In the very fun movie The House with a Clock in its Walls (based on the classic novel by John Bellairs, which I loved as a child), the warlock character Jonathan Barnavelt starts searching for books to help out in a bad situation. One of the books he's trying to find is the Malleus Maleficarum, an actual book that is known as the Witch Hunter's Bible.

It was written in/around 1486 by two German inquisitors, Heinrich Kramer and James Sprenger, who were wandering through Northern Germany to help towns with their witchcraft problems.

The title translates to "the Hammer of Witches"—i.e., the weapon which you can use to hammer them down—you can see the root of "mallet" in "malleus."

The book was written to assist if the two friars couldn't happen to be there in your village at the time a witch was ruining everything for everybody else. Says translator Montague Summers, "The Malleus lay on the bench of every judge, on the desk of every magistrate. It was the ultimate, irrefutable, unarguable authority."

This book is still in print today.

It discusses the things witches do (just flipping through, I am seeing chapter headings like, "How they are Transported from Place to Place" and "Here Followeth how Witches Injure Cattle in Various Ways"), how to question them, and how to pass sentence on them. It contains very legal language and is deadly serious in its pragmatic approach to an otherworldly crisis. The language in the sentencing parts is actually so legalistic and long-winded that I hesitate to include an excerpt!

The book lays out 35 kinds of questions to put to a witch. Here's the heading for Question 34: "Of the Method of passing Sentence upon a Witch who Annuls Spells wrought by Witchcraft; and of Witch Midwives and Archer-Wizards."

It's like The Handmaid's Tale meets Dungeons and Dragons. The witch midwives "surpass all other witches in their crimes" and the archer-wizards (as in, archery) "constitute the graver danger to the Christian religion in that they have obtained protection on the estates of nobles and Princes who receive, patronize and defend them." Archer-wizards enchant weapons so they don't work right, while witch-midwives either kill the child in the womb or offer up the newborn to the devil (an example of this is seen in the woodcut above).

The book is a lightning bolt of shocking entry into the superstitious, ignorant medieval world. In my novel The Witch's Trinity, set in Germany during this time period, an elderly woman is so indoctrinated in this cultural mindset that when she is accused of witchcraft, she isn't completely sure if she's innocent. 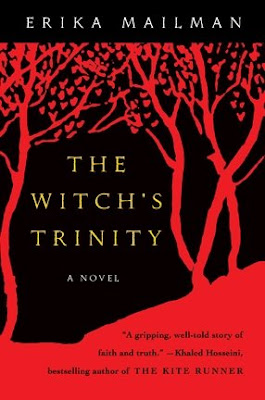 As I continue to flip through my copy of the Malleus, I see passages I highlighted just because they blew my mind, and handwritten marginal notes where I had to vent. In a random flip-through, here is a pretty interesting section:

"An example was brought to our notice as Inquisitors. A town was once rendered almost destitute by the death of its citizens; and there was a rumour that a certain buried woman was gradually eating the shroud in which she had been buried, and that the plague could not cease until she had eaten the whole shroud and absorbed it into her stomach."

Yikes, rumours can be so vile! Hungry corpses are the worst!

If you're curious how it ended, the city's governor caused her to be dug up. The Podesta (an Italian official) cut her head off with his sword, "and at once the plague ceased." This anecdote is compelling not only for its eerie image of the woman eating fabric in her grave, but also because her exhumation was official and endorsed by the highest levels of city government.

If you're wondering why calmer heads didn't prevail, the very first part of the Malleus establishes that not believing in witchcraft constitutes heresy. So, to save your own skin, you'd become a believer, too.

I hope you've enjoyed this look at the very, very dark recesses of medieval justice. And hey: please vote in November!