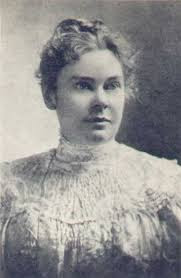 Birthdays are important things. Some people take them more seriously than others; I personally always took the day off work and enjoyed the fact of my being on earth. Others prefer to pretend the anniversary doesn't exist, denying the onslaught of years.

It's interesting to note that the murders of the Borden parents took place a mere two weeks and two days after Lizzie's 32nd birthday.

I remember turning 30. It felt like a crisis: I hadn't accomplished any of the things I wanted to accomplish: publishing a novel (or 20), having children. I had my mid-life crisis early.

Imagine what it was like for Lizzie Borden, turning 32. In an era that only prized wifehood and motherhood for women, she had no suitors (that we knew about anyway). In a time period that freely threw around the pejorative word "spinster," she was one. As much as we feel sympathy for kids still living at home in their thirties today, imagine how it felt to live at home when you were jobless, powerless, feeling like you had no true "value" in the world other than your volunteering through the church. And with no wifi.

Lizzie volunteered sporadically, undertaking positions and then abandoning them. It has always seemed curious to me that she did not join friends at the seashore at Marion at the time of the murders merely because she needed to do a "roll call" as a volunteer leader. I can only assume a roll call means registering those who will serve on a particular committee and solidifying the responsibilities. Why did she feel that was so important, when she had preemptorily left other posts? If she had gone to the seashore, felt that healing connection to the sea, let the wind lift her hair off her neck, would some of her feelings of rage have abated?

In my novel The Murderer's Maid, I posit that she didn't go to Marion because she had her period. In those tamponless times, it would be no fun to soak cloths in a bucket--and maybe she'd be sharing a room with a friend-- and trying to hide the signs and smells (ordinarily, at home, the maid would deal with such unpleasant tasks). It is said that 1892 was one of the hottest summers on record.

Her roll call ended up having a much more deadly tally.

In astrology, 28-30 years of age is when people experience their first Saturn return, meaning that Saturn returns to the same degree and sign it was in when they were born. Saturn is the planet of responsibility - it's sometimes referred to as the celestial taskmaster - and as such that first Saturn return can be a real humdinger. I'd be curious to see an astrological chart of Lizzie's, and one for when the murders occurred.

Your theory is fascinating. Any idea if she had a condition that made periods especially painful?