Did Lizzie Borden try to poison her father and stepmother?

If a woman was accused of murdering her father and stepmother, both of whom were brutalized with a hatchet, and you knew she had been trying to buy poison the day before, wouldn't you consider that important evidence?

The judges in the Lizzie Borden case didn't.

When Eli Bence, a druggist, tried to testify on the ninth day of the trial that Lizzie had come in and tried to buy prussic acid from him, the defense attorney objected. The jury was temporarily taken out, as was Bence.

Prussic acid, by the way, is hydrogen cyanide. It was used as an ingredient in Zyklon B.

In a conference at the bench, prosecution attorney William H. Moody (who would later serve as U.S. Attorney General) told the judges what Bence was preparing to say: Lizzie had tried to buy prussic acid, saying it was for cleaning her sealskin cape, and he had refused to sell it to her since she didn't have a prescription. Lizzie had lightly argued, saying she had bought it there several times before.

Lizzie's attorney George Robinson (former governor of Massachusetts) objected, saying since there had been no sale, the testimony didn't matter. Hosea Knowlton, the other prosecuting attorney, stated that he had evidence she had tried to buy prussic acid in another place, also unsuccessfully.

Robinson countered that since no poison had been found in the stomach of Andrew and Abby Borden, "There is shown no connection, as assailing the lives of these two persons....it is an attempt to charge her with an act causing death by a wholly different means, for which, of course, she is not now on trial."

Robinson went on to say that since the prussic acid attempt was on Aug. 3 (1892), and the murders were on the 4th, "the nearness of time may be considered out of this consideration; it is not sufficiently near, if it were pertinent."

Call me crazy, but the day before is pretty darn near. I guess, however, if the only way you can even begin to wrap your mind around a woman committing such a crime (please see my previous post about Lizzie not facing a jury of her peers) is if you consider it a crime of passion, then the previous day doesn't work. Because that reconstitutes the crime as one of premediation (although...if Abby was murdered at least an hour before Andrew— and she was— that also takes "crime of passion" off the table).

Robinson continued on to say  that even if Lizzie did try to buy the prussic acid, it was "an article which a person may legitimately buy." He closed with, "Does it have any tendency at all to show that this defendant killed these two persons with an ax? That is all we are inquiring about. I maintain it does not."

Moody rightfully jumped in to claim premeditation. He raised the issue that the Bordens were ill days before the murders. He said that the day before the murders*, Mrs. Borden had gone to the neighbor, Dr. Bowen, "and stated that she had been poisoned the night before." Not food poisoned: poisoned.

*Records suggest her visit to Dr. Bowen was in fact on Aug. 2 rather than the 3rd.

Moody discusses the concept of relevance, referring to "Mr. Wharton's treatise upon Evidence." (Another blog post for another day: the Shakespeare-spouting prosecution as too erudite and professorial for the farmer jury who resented city folk. Victoria Lincoln's book A Private Disgrace contains a great rumination on this).

He then threw down precedents from Massachusetts and other states. One interesting one was from Pennsylvania, where a man had stated earlier in the day that he wanted to kill someone before the day was out, and then he was charged for the homicide of someone killed that day. Moody went on for a long time talking about other cases. (Another blog post for another day: the sheer boredom endured by the jury. The transcripts even show the attorneys talking about how they had to break for the day because no one was listening).

Robinson's last hurrah: Lizzie herself was sick; why would she poison herself? Moreover, she hadn't stated she was buying the prussic acid to kill anyone: "My friend [Moody] said in his admission that there is nothing in this evidence to show against whom she premeditated the malice." He made a strange hypothetical comparison, supposing that Lizzie had bought the poison to kill Bridget Sullivan, the maid.

Moody: "There is a tendency to show to whom the malice is directed."
Robinson: "Is that what you said?"
Moody: "That is what I said."
Robinson: "...where is it? where is the least tendency? Where a scrap, even? Well, people buy prussic acid to kill animals--it may be the cat...."

More legal bickering ensued, then the justices withdrew for consultation. They thought the evidence was competent, and they would hear preliminary evidence before deciding whether Bence could testify.

The next day, preliminary evidence was heard from a pharmacist, furrier and chemist, all talking about if prussic acid could be used for the purpose stated by the mysterious shopper in Bence's drugstore (short answer: no, although my edited version of the trial transcript doesn't contain their testimony).

That was followed by a half-hour confab between justices and counsel at the bench, "all speaking in low tones and out of the hearing of the stenographer" (Pearson 252).

What was said in that conference? We'll never know (but keep reading, there's a theory below). The upshot: the poison evidence was excluded, and Bence was not allowed to testify.

So here are some of my thoughts.

I think Lizzie tried some kind of homemade poison first. Everyone sickened, but no one died. So she tried to buy real poison, asking for prussic acid as a cleaning agent to disguise its real purpose, but no one would sell it to her. In frustration, she turned to the hatchet.

My response to Robinson would've been, yes, the two methods (poison and ax) are very different, but doesn't it seem like the more "genteel, woman-acceptable" form of murder would be first selected by Miss Borden?

Circling back to what was generally accepted to be food poisoning within the Borden household, a few things are important to note:

a)      she had to poison Bridget to cover her tracks, or
b)      she didn't expect Bridget to eat the dish she'd poisoned, or
c)      Bridget only claimed to vomit, which would mean she was in on the plot.

I had long considered Lizzie's attempts to buy poison one of the two most compelling indications of her guilt, the other being her burning of a dress shortly after being informed she was a suspect.

Yet my tour of the Lizzie Borden house, led by incredibly well-informed guide Colleen Johnson, introduced a bit of explanation I had never heard before. She said that the conference at the bench was about a secret police sting whereby police officers' wives would enter drugstores and try to procure poisons without a prescription. The sting was ongoing, hence the need for secrecy. Moreover, one officer's wife resembled Lizzie Borden. It was a case of mistaken identity.

I'd love to have the existence of the sting solidly confirmed. A few questions arise:

In favor of this theory is the oddity of the judges so readily dismissing Bence as a witness. It would explain the very lame explanation that was given for suppressing the evidence. It would also instantly explain away Knowlton's stated knowledge of other attempts at other drugstores.

Tour guide Colleen Johnson has been incredibly helpful, answering questions for me via email after all the millions of questions I asked her in person. She sent me the following quotation in response to my questions about the sting:

Interesting that there was a thought Lizzie bought poison as a suicide measure if she was imprisoned (the punishment, had she not been acquitted, was death by hanging, so possibly preferable?). Then there is that mention of "female agents," which tends to support the idea of the sting.

This case has so many twists and turns it is no surprise it is so studied and talked of today.

In other news, in honor of October's witchy gloom, my novel The Witch's Trinity is on ebook sale until Oct. 24 at only $1.99. When medieval German woman Gude is accused of witchcraft by her own daughter-in-law, she must examine herself to see if the finger pointing is true.
"In searingly simple prose, Mailman probes the human psyche, peeling back the layers of the basest human instincts to expose the dangerous frailties of the human soul." —Booklist
“A disturbingly effective historical novel.” —Boston Globe
Amazon link: http://amzn.to/2dtMn7Q
Nook link: http://bit.ly/2dpMYKc 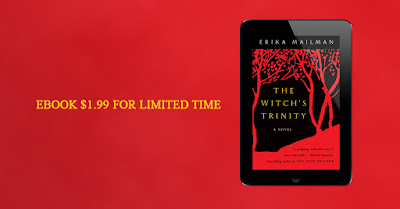 Note: All trial quotations in this post are from Trial of Lizzie Borden by Edmund Pearson, 1937 (1989 Notable Trials reprint).

It's very cool when a writer's interest in a subject leads from fictionalizing it to offering fresh theories. Who was it, the great crime writer Patricia Cornwell, she did some fresh original work on Jack the Ripper.

I bought and d'loaded Witch's Trinity. Hold not thy breath, I am a very slow and inconsistent reader for being a very busy boy.

I don't know if my musings represent any fresh theories...probably everything's been thought before. I didn't know Cornwell came up with some new stuff on Jack the Ripper! Many, many thanks for purchasing Witch's Trinity. I will return the favor when your book comes out! xxo

Did Lizzie Borden OWN a sealskin cape?