Confessions of a serial plant killer 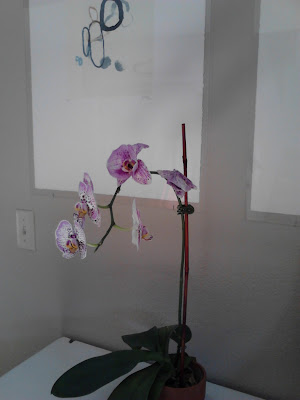 Call me Lizzie Borden of the Lobelias.

I love plants and flowers and never intend to do them harm, but alas have some penchant for spelling their demises. Cacti, which apparently are very difficult to murder, have lapsed and sagged under my attentions. Ficus have browned. Spider plants have woven their own webby cauls and collapsed. However!

I have had good luck recently. I have not one but TWO success tales underway.

Tale the First. This narrative involves an orchid that was (!!!) $5.99 at my grocery store, and I figured even if it died within days, it would be the same as purchasing a low-cost bouquet. But I brought it home thinking, "If only I could keep it alive..." I googled how, and learned that the orchid requires, get this, "benign neglect." That is so up my alley! I calendared two week increments to soak it in boiled-then-cooled water, then ignore it. I faced it by the eastern window as the internet directed.

It has thrived. It actually opened up two blooms. I was incredulous. It has also lost two of its existing blooms, but I am given to understand that may be natural? At any rate, the losses have equaled out the gains and I feel pretty proud of my orchidal accomplishment. 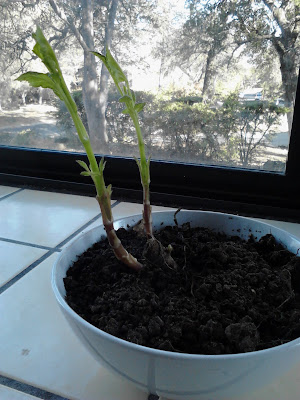 Tale the Second. The same grocery store was offering bulbs in boxes for 25 cents. I figured at these bargain basement prices, the bulbs were already dead, but what the heck. So I planted the dinner plate dahlia in a cracked white cereal bowl and watered it casually when I was in the kitchen and thinking about it. In disbelief, I have watched a green shoot emerge from the brown woody stem, and get bigger each day. I did that. Me.

I'm scared to transfer it outside, especially given our 100-plus temps this summer, but eventually I will usher my fledgling to the real dirt outside. Wouldn't it be wild if it worked, and I actually grew those blooms that are the size of dinner plates? I would faint.