An engaging look at the past

Mary Volmer's Reliance, Illinois, is a book I've been enjoying in slow sips, like a glass of very old sherry. It rewards slow reading, for Mary's prose is unlike any other writer's. I first got to know Mary through her novel Crown of Dust, which for a Gold Rush novel is unusually dark, somber, laden with ochre. This isn't the ebullient "Westward, ho!" novel...it's about the people who didn't strike it rich and got stuck in a part of the west not well traveled. Its quiet beauty is memorable. But I digress...I'm talking about Reliance now!

Again set in the 1800s, Reliance is about a small town and its secrets, and one girl at the center of it all. Look at this gorgeous cover. 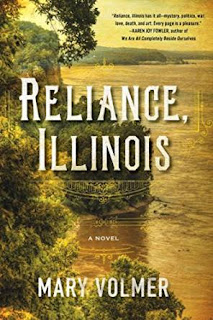 I asked Mary to do an interview on my blog and she agreed to answer these three questions. Mary's doing a reading at Face in a Book bookstore in El Dorado Hills, California, this Friday the 22nd at 6:30 p.m. I'll be there, and I hope I'll see you there too! Mary's a great presenter, and it's sure to be a fun and witty night!

1       1. Why are you so drawn to the 1800s?
Mom always had biographies and historical novels lying around the house.  When I was a girl, she read me books such as Johnny Tremain (a revolutionary war novel), and 19th and early 20th century authors like Laura Ingalls Wilder and Louisa May Alcott. I suppose it’s no surprise my imagination turned to the past when I started making up my own stories. I guess another reason is that when I started writing seriously I was living abroad in Wales, a country with a rich history, physically apparent in the castle ruins and standing stones that graced the landscape of my university town, Aberystwyth. Living there, I felt oddly compelled to look back on the history of my own town and country, and also to question the national narratives, those simplified (often sanitized) origin stories, I learned in school. I discovered the relatively short history of the United States was full of vibrant and volatile landscapes, contradictory accounts and fabulous characters. It seemed natural to write about them. And the disconcerting fact of the matter is, we’re dealing today with many of the same issues and fears that consumed us generations ago.

2. Your characters are often downtrodden, powerless. Can you address that?
I’m drawn to survivor stories and tales of resilience, and I’m equally drawn to stories about women, who in the 19th century were largely downtrodden. Until the latter half of the century, women possessed few economic or political freedoms and had little access to education. While they were not universally powerless, any authority they wielded had social consequences far more serious than the many layered stigmas powerful women endure today. I’m fascinated by the lives of these women and the communities they loved and struggled within. If history is written by the victors, I think an argument can be made that fiction (a great deal of it, at any rate) is written for the downtrodden, the forgotten, the novel and unnamed.

3. What are you working on now?
I’ve been working on three projects, but will need to settle into one of them in the next month or two (or none will get finished!). The first is a contemporary novel set in the Sierra Nevada Foothills, the second is a detective novel set in two time periods: contemporary and colonial Virginia. The third is set in Boston, Northern England and South America after WWI. That’s a vague answer, I know, but I don’t want to give too much away! And, of course, the stories will change as I write them.

Crown of Dust intrigues me!