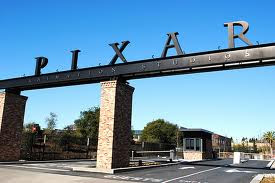 All my life, I've loved being around creative people. Last week, thanks to a freelance assignment, I gained access to the closed campus of Pixar Studios in Emeryville, California.

This was incredibly exciting to me. I love the playfulness and true drama of Pixar films, so yes, it was worth it to me to travel four hours round trip (and squeeze in a visit with a few old wonderful friends too) to be on campus for a few hours and watch a thirty-minute teaser clip of the new movie Brave.

Driving through the monumental front gates (and seeing each car ahead of me really get grilled; there is no such thing as being waved through here), I felt the thrill of being in a place where everybody is thinking story. 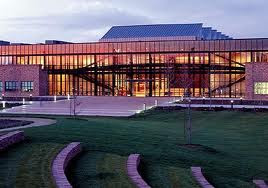 I parked (even that was exciting) and waited in line to enter the main building. In this photo, you can see that it contains an atrium with lots of light. That room was filled with hanging banners for Brave (set in old-world Scotland) and almost has a Hogwarts kind of feel. Backing up a bit, in the photo you can see the tiered seating of an outdoor amphitheater. For this visit it held a Stonehenge-like circle of stones, and across the meadow, a bunch of archery targets. Having not yet seen the film, I thought these were, respectively, permanent art and a recreation opportunity for staffers.

Waiting in line to enter the main building, the woman ahead of me chanted to her friends, "We're at Pixar! We're at Pixar!" I felt the same way but curbed myself, since I was alone and you never look healthy when chanting to yourself. Immediately inside, you're greeted by giant replicas of Scully, Woody, Buzz and other buddies from the oeuvre. There's also a glass case of trophies including six Oscars and a million other glinty pieces.

Security to enter the theater itself was much stricter than the airport. All cell phones had to be turned in to a sort of coat check for electronics, and when they look through your purse, it's not a cursory glance. They are moving things around and really looking. I had not thought of my Garmin nuvi ("Jack") as a person of interest, but I had to go back and add him to coat check too!

The director and producer made wonderful introductory remarks, the movie clip was delicious, and we were all escorted to another building for a lavish refreshments spread. This was held in an open-air patio reminiscent of the Standard Hotel's rooftop in L.A. A great view of the campus could be had from here: I saw one guy swimming lonely laps in the pool, and there is a volleyball court, basketball court, gym, and cafeteria: basically, Pixar is a village and no one need go home until their creativity lapses.

Thanks, Pixar, for the opportunity to visit this incredible facility. (Now, would you like to hire me?)
Posted by Erika M at Friday, April 13, 2012

Email ThisBlogThis!Share to TwitterShare to FacebookShare to Pinterest
Labels: writing

The imaginative energy around creative people is incredible, isn't it! How did you manage to gain access??

Hi Alpha76,
I was doing an article on the director and producer of Brave for Oakland Magazine, and thus got access to a media night.