Sneak preview of Downton Abbey Season 4 at the Crest Theater 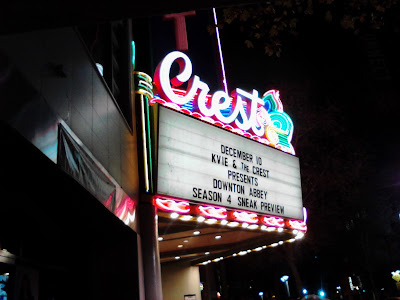 I'm supposed to be blogging in support of my virtual book tour for Woman of Ill Fame this week...but I can't help but pause and celebrate the new season of Downton Abbey. I was lucky enough to score tickets to the sneak preview showing on the big screen at the Crest Theater in downtown Sacramento tonight. I went with my great friend Diana, and we had a blast.

First, the theater. I have a fondness for old movie palaces! The Crest was built in 1913 as a 2,000-seat Vaudeville house. The theater's website does not mention the architect's name, but I'm betting on Timothy Phlueger, the designer of the Oakland Paramount--there were many design elements in common. It is a show-stopper of a building and I would've been happy just being there.

But there was also Downtown Abbey on offer.....

More on that in a second. I want to thank KVIE for arranging the free showing (yes, by God, it was free) and the Crest for hosting. It was just the most fun night I've had in a long time. There was a costume contest beforehand, and people had the most gorgeous Edwardian outfits on. I didn't mind the line in the women's restroom because there was so much eye candy with the lovely dresses.

The fellow who won the male contest was dressed as a WWI soldier and handily won the most claps/noise from the audience. I was also very impressed with the man in a top hat carrying a white life preserver: he was Patrick, the drowned heir from the Titanic. The woman who won was dressed as Mrs. Pattmore, and got many whoops. I have to admit, I was one of the whoopers. I love Mrs. Pattmore the best of all the characters on the show. I did, however, whoop harder for the woman dressed as Anna Bates, because I had waited outside to enter the theater just behind her and inveigled her to take a photo with me. I'm loyal. I also liked seeing a self-identified Pankhurst with her women's right to vote sash, a friend of Sybil's.


KVIE showed some previews for upcoming shows which were really entertaining. And then....and then....Downton unfolded.

I have to hand it to Julian Fellowes yet again (I blogged my deep admiration here). In one hour--it was a sneak preview giving us the first half, not the entire enchilada--I was moved to tears several times, gave out great gasps, grinned in pure bliss. I even had to reach over and seize Diana at one point in sheer startlement ("You wicked, wicked half-breed," anyone?). He just is a talented storyteller, and I adore him. I adore Downton Abbey. I adore it all.

Thank you KVIE and the Crest! I can't wait until Jan. 5 when the new season commences on PBS. 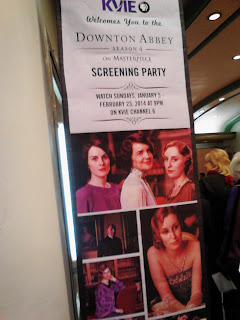