Ann Marie Meyers: Up in the Air 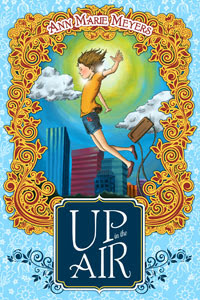 I'm going to take a little break from the wrap-up posts about the Historical Novels Conference this last weekend in St. Petersburg to host an old buddy.

Ann Marie is someone I remember fondly from the old days at the San Francisco Writers Workshop. We both attended religiously about six or seven years ago. Now she has a children's book out called Up In the Air. Isn't that a gorgeous cover?

I'm very happy to host her today with a little Q&A about the process of writing this book and her career in general.

I get my inspiration from just about anything. Something I read, or overhear; a thought that flashes through my mind, the look on someone’s face; my dreams, especially my dreams. Sometimes I just let my mind go blank and write down the very first thing I think of and then see where that takes me. My very first book was written this way.

Surprisingly, neither of the above. The idea came to me while I was meditating one day. That was the first and, as of now, the last time such a thing has happened to me.

No. Definitely not. I have always enjoyed reading. I devoured hundreds of books when I was young, and I loved writing essays in school and letting my imagination fly. Then, one day, (in my late teens actually) to my utter shock, I started a journal and the very first words I wrote were: “I want to be a writer”. I have no idea where that thought came from, though I didn’t actually start to write until much later, and even then I didn’t embrace the idea at first. I resisted.

Some of the famous authors I studied in school (eg: James Joyce and D. H. Lawrence) were so unhappy I wanted no part of it. I wanted to be happy, unfettered by depression (idealistic but true).  Eventually though, over time, I learned to accept the fact that I wanted, even needed, to write and create stories.

Quite by chance actually. I remember seeing advertisements appealing to people to write children’s books, but I never paid any attention to them. After my daughter was born, I began having thoughts about what she might like to read but it wasn’t until she was about 3 years old that I actually wrote my first children’s book, Up In The Air.

Email ThisBlogThis!Share to TwitterShare to FacebookShare to Pinterest
Labels: writing

Thank you so much for hosting me, Erika!!!!