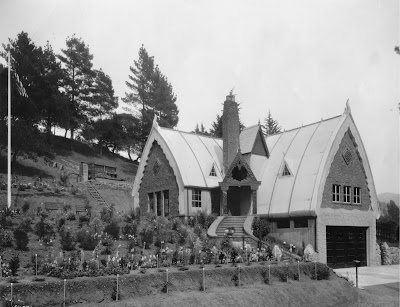 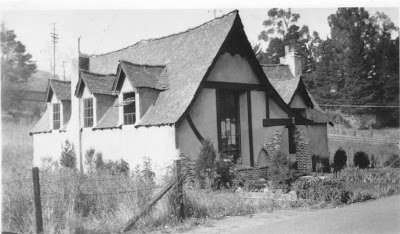 A reader emailed me recently. She had remembered my (long ago! dating to 2002) Montclarion column about Storybook architecture in Oakland. This style is near and dear to my heart. The article is not cached online, so I’m going to post it here on the blog, slightly rewritten from its original text.

Storybook is the style of architecture that makes you feel like you suddenly slipped into the Germanic forest of Hansel and Gretel, and are peeping at a quaint cottage in the clearing. The Montclair neighborhood boasts two wonderful public examples, pictured here.

At top is the firehouse on Moraga Road. Its roof is not supposed to be painted white to represent snow, but should rather shine with its original copper finish to represent flames –see them roaring up at either end of the building-- quite appropriate for a firehouse. Note the scalloped roofline, the heart above the entry, the tiny windows in the eaves: all illustrative of that olde worlde charm.

The other structure is the library on Mountain Boulevard. Its roofline was built to look like it was already sagging for centuries, although the library was quite new at the time of this photograph. You can see the clinker brickwork behind the bushes and its general homespun, European appeal.

I must credit the coffeetable book Storybook Style: American's Whimsical Homes of the '20s by local architect Arrol Gellner. It’s filled with gorgeous photos by Douglas Keister of many Bay Area buildings, including private residences in Oakland, Berkeley, Piedmont and Alameda. In an email interview, Gellner told me that he thinks "Storybook Style homes, more than any other, represent the embodiment of the builder's personality, creativity and sense of humor. They're also a snapshot of an optimistic era when anything seemed possible, which no doubt appeals to people in these jaded times."

So what defines Storybook? Gellner calls it a "rambunctious evocation of medieval Europe" and sets the three criteria: an overstated rendition of medieval forms, use of artificial measures to make the building look extremely old, and the third, amorphous quality: "whimsy."

Storybook homes, at their most extreme, have crooked chimneys, lopsided walls, roofs that undulate like the wind making waves on a pond, misaligned shingles, askew shutters, clinker brick: all things to suggest antiquity, as if the very house is settling due to its age. Some homes have drawbridges (like Humphrey Bogart's Hollywood home) or streams with bucolic bridges over them, reminiscent of a pastoral Europe.

Gellner presents an interesting reason for why Storybook architecture arose. Even dating to the 1700s, people were fascinated by the Middle Ages (my dictionary says the Middle Ages ended in 1500, so the fascination began 200 years later). For instance, Marie Antoinette's famous "farm" at Versailles was her interpretation of a medieval countryside hamlet. The 1869 castle Neuschwanstein (which Disney later based his Sleeping Beauty castle on) is in essence fake, because it purports to look far older than it is.

Gellner points out that because Victorian style was so fussy, with its overwrought gingerbread detailings and interior doilies and tassles, people longed for a return to simpler times, like the society of a medieval town where goods were made by hand rather than in a factory. This was the basis of the Arts and Crafts movement, which valued craftsmanship. By the 1920s, people were ready for Storybook architecture, which allowed them to pretend they had stepped back in time. However, it seems to me that storybook architecture is a little fussy on its own, with turrets and eaves and different roof levels. Gellner says Storybook architecture relies on Craftsman ideals (like using natural materials, buildings of a small scale and architecture that appears organic to its setting) that were "recast in a rather more theatrical style."

And why theatrical? A major factor contributing to the rise of Storybook was the indomitable presence of Hollywood. By the 1920s, talking movies had created the first "stars" – people whose homes needed to reflect their unique standing in life. Moreover, there was a ready workforce that was used to creating fantasy sets – or was inspired by them – builders whose dials were already set on creative. Hollywood is indeed, as Gellner says, the "epicenter of Storybook style," although I did see at least 10 Oakland buildings featured in the book, as well as a handful from other Bay Area cities.

Another reason for this style? Men returning from WWI with memories of appealing European villages.

Sometimes entire housing tracts were built in Storybook style. Three are local, and were all based on designs by Oakland-based architect W. W. Dixon. One is Stonehenge in Alameda, another is Normandy Gardens in Oakland, and the third is on Oakland's Ross Street. This street was chosen because its electrical and phone cables had already been undergrounded by the time of the construction, and the street had pleasant light standards, rolled curbs and concrete pavement rather than asphalt. Part of the Ross Street tract, built by R.C. Hillen, was removed during freeway construction in the 1960s.

A few other streets host Storybook enclaves. One is 75th Avenue near MacArthur Boulevard. This stretch is called Holy Row, Gellner says, because at one point many of the homes were lived in by various church leaders. These homes were built in the early 1930s. Another street is the charming, tiny Veteran Way in the Dimond District, with three full-fledged Storybook homes and several "almosts."

Storybook architecture was gone by the late 1930s when Art Deco took over—a style that was also revivalist, looking in part to Egyptian motifs after the 1922 discovery of King Tutankhamen's tomb. Unfortunately, there are few buildings left. Gellner told me "Sometimes we (he and photographer Keister) had to spend days just to find one good one. It was like finding a diamond buried in a sand dune." So Oakland should certainly appreciate its good fortune in having many structures!

I have a soft spot for this style of architecture. There are many old neighborhoods in cities across the country where you can find examples. You've probably been to Carmel-by-the-Sea--and seen the Tuck Box, the little tea place there (an example of the storybook restaurant).

These are cute, sure, but I tend to prefer more modern, slick, streamlined and simple architecture myself - perhaps I'm boring that way!

What an interesting post! I wouldn't mind living in a storybook house! I am glad I found this blog (signing up as a follower.)!

We live in one and take it for granted. Love our house.