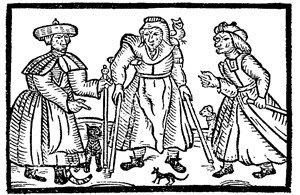 If you’re looking for The Witch’s Trinity giveaway, keep reading; it’s the post under this one.

It’s been a long time since I posted an excerpt from the Malleus Maleficarum; it’s time. I’m going to write about an anecdote the friar authors relate, about a woodcutter in Strasburg.

While he was cutting wood one day, a large cat attacked him. While he drove it off, another appeared, larger and more fierce. He fought off those two, then a third showed up. He crossed himself, and in a great panic beat them away by hitting one on the head, one on the back, and one on its legs.

He returned to his work. An hour later, two men came and took him to the magistrate. He was under arrest!

The judge kept his distance from the man and refused to listen to him—the man was tossed into “the deepest dungeon of a certain tower, where those who were under sentence of death were placed.” He stayed there three days, begging his jailers to help him get an audience with the judge.

Finally the judge relented, and he got his hearing. He threw himself before the magistrates and pleaded to know what his crime was. The judge said:

You most wicked of men, how can you not acknowledge your crime? At such a time on such a day, you beat three respected matrons of this town, so that they lie in their beds unable to rise or to move.

The man protested his innocence, said he was cutting wood all that day, and in fact the men who arrested him could attest that that was what he was doing! Upon further reflection, the man remembered the cats. “I remember that I struck some creatures at that time, but they were not women,” he said.

The woodcutter told of the three large cats that attacked him. Horrified, the magistrates let him go.

The anecdote ends there, but the Malleus goes on to examine it. Did devils arrange the attacking cats without the presence of the witches, or were the witches actually there in the shape of the cats?

The friars believe the second:

For when the devils attacked the workman in the shapes of cats, they could suddenly, by local motion through the air, transfer the women to their houses with the blows which they received as cats from the workman; and no one doubts that this was because of a mutual pact formerly made between them.

As with all the anecdotes, I try to reason out a reasonable explanation, but sometimes the stories are simply too farfetched to do so. With this one, I came up with a few ideas:

A. The man really did attack these women in a fugue state. Returning to his work, possibly one cat snarled at him, and he confused that brief cat skirmish into the maelstrom of beating. He did say that during the cats’ attack he was “more panic-stricken than he had ever been,” which may explain his increased adrenaline after the real attacks on the women.

B. Rabid cats? But that doesn’t explain the damaged matrons who sent the magistrates after him.

C. Pure, total, crazy fantasy on the part of the witch hunters. The Malleus says it is “charitable and honorable” to withhold the name of the town in Strasburg where this happened. Makes it kind of hard to double-check facts when the scene of the crime is unknown!

For those interested in reading more, this is from Part II, Qn. I, Ch. 9 of the Malleus Maleficarum.

Image is from www.bottesfordhistory.org.uk and is a woodcut from The Wonderful Discovery of the Witchcrafts of Margaret and Phillipa Flower, about women executed at Lincolne, England in 1618.