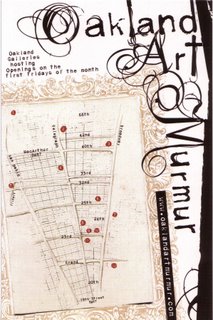 Last Friday, Alan and I went to Oakland Art Murmur, where a dozen art galleries open their doors from 7 to 10 p.m. Equally exciting, Telegraph near 24th was completely blocked off to traffic, and twenty-somethings milled around drinking from their bottle-in-a-bag (you know, homeless chic) and there was a drummer’s circle and a fire dancer. It was so great. Oakland has so much creative energy: these kinds of things show it.

Jeff of Oaklandish was there broadcasting an HBO show “City of Rebels” about the A’s and the Raiders in the 1970s, screening onto the back wall of his tent where he sold Oakland love merchandise. Jeff’s a huge asset to Oakland, and he told me briefly about some of the things he’s tried to organize and how the city pushed back because they’re cautious and truculent and don’t get that people like him are good for Oakland. I’m going to interview Jeff at some point for the Montclarion about the events he is even now trying to organize with lots of resistance.

Anyway, back to the positive. We saw lots of fabulous art, and even two pieces I looked at the price list for. Someday when I’m a high roller….

Art Murmur happens every first Friday, so the next one will be Sept. 1.

P.S. I didn't even realize until I was creating a title for this post that Art Murmur is a play on "heart murmur." Those guys are so clever!