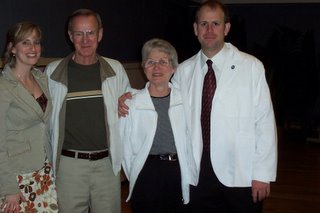 Well, I had been wondering how to transition in this blog from the utter sadness of losing Debi to more mundane topics. But what has arisen is another big moment in my life: watching my partner Alan graduate from the academic portion of his P.A. program to the clinical rotations segment.

To mark this transition, the school holds a White Coat Ceremony where the students actually receive their white coats for the first time. Over the last year and a half, I have watched Alan work harder than I have EVER SEEN ANYONE WORK IN MY ENTIRE LIFE.


My heart was full to bursting to think of him successfully negotiating this insanely hard program… and doing it with a great GPA and earning the support of everyone around him. His classmates voted him the class speaker, and sitting in the audience with his parents watching him deliver this speech was so moving that I had to bite my fist and control the little rags of breath that were threatening to push me over into full-bore sobbing. (As it was, I wept very discreetly and in the photograph here of me with him—in his coat!—and his parents, my mascara hadn’t run… and it wasn’t even waterproof! A miracle.)

His speech was perfect: laugh-out-loud funny, surprising, and of course with a thoughtful message and all the poignancy that such a situation demands. As a writer, I loved it that part of his “thoughtful” part was about the power of words… how someone in the medical field can build up or destroy someone with just a few words. Patients lay their hearts in their hands and present them up to their health care providers, hoping that the news back will be something they can handle.

Another main theme was how everyone around the students wants them to succeed, and he told an anecdote about volunteering at a diabetes screening in the Fruitvale neighborhood where people gladly offered up their fingers for clumsy and multiple stabbings, knowing that they were helping PA students learn how to do it.

Man, was that ever an impressive speech, and of course peppered with Alanisms that made everyone laugh (I saw one guy half-rise out of his chair and bury his head in his neighbor’s shoulder, he was laughing so hard). And afterwards, he got a huge and extended standing ovation.

As many people told him, and I wholeheartedly agree, that was the best speech they’d ever seen. He was just so real, as one person said. In fact, one of his jokes was to mock the speechiness people usually deliver. Leaning into the mic, he lowered his voice and talked about how we are leaving behind the past (pointing behind him with his finger), and moving into the future (again, gesturing) and that this was the “equinox of our education.” (Alan said he was really proud of this equinox line and originally intended to use it seriously, but at 2 a.m. in the café the night before graduation while he was pounding out the speech on his laptop, he realized how ridiculous it was.)

I have never felt so proud of someone that it actually felt painful. I wonder what it feels like to be a parent and watch those graduations. Someday I’ll need a big prescription of Valium – and I know just the person to prescribe it!