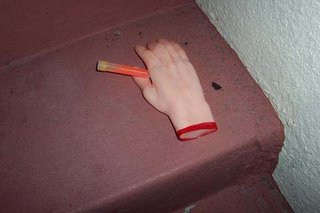 Since everyone is my family is really, really good at painting, quilting, basket-weaving, carving and/or cabinetry, and I am terrible at all those things, I have to make up my own sort of crafts. These fall under the loose category of Halloween Manufacturing.

The first craft to discuss is the Hands of Death that Lead You to the Door. Here's how I cooked it up. I saw that the Oriental Trading Company offered a dozen vinyl hands for like $6. In the photograph, the hands looked perfectly rounded and I assumed that they were full-on rubber hands. But rubber does not vinyl make, my friends. I learned that the bitter way. The hands, when they arrived (hilariously, in a clear plastic bag), were hollow. So, putting that Yankee ingenuity to use, I filled them with water and put them in the freezer. This actually added the nice element of the hands being ice-cold to the touch. I had also purchased a dozen orange glow sticks for the express purpose of inserting one into each hand's, uh, hand, so that when I lined them up, they would lead hapless trick-or-treaters right up our steep staircase and to the candy. And that's what happened! 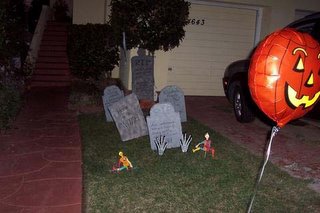 The next craft is the Tombstones a la Home Depot. I had to buy an eight-foot by five-foot sheet of thick styrofoam. It was huge. I asked the Home Depot staff to cut it down just so I could fit it in my car. Their box cutters only allow 2 centimeters of knife to poke out; they're the equivalent of safety scissors with rounded edges. But we managed. At home I used a regular kitchen knife (I suppose it's dull now) to cut out tombstone shapes. Recommendation: do this outside, as lots of little styrofoam shrapnel is released during the cutting process. Then I spray-painted them gray. One interesting thing to note is that the force of the spray paint actually pushes in the styrofoam a bit, which gives the "stones" a weathered, time-beaten look. Then I used a thick black marker to write 1800s-y epitaphs on the tombstones. Finally, I used a screwdriver to make a hole in the bottom of the tombstone, which I pushed a short dowel into. The other end of the dowel drives down into the ground, so the tombstone can stand up in the yard. Be careful when pushing in the dowel because it wants to rip through the front of the tombstone (thicker styrofoam makes this less likely). I made three tombstones (see the really tall one in the very back, with the circular headpiece?) out of half of this sheet; I will make three more next year. The other two were from last year, when somehow I was able to buy a smaller sheet. Those colorful skeleton figures are from a Day of the Dead celebration several years ago: Alan made the one on the left and I made the one on the right.


We had a Halloween party on the 29th. I rented an 1800s costume from a costume store, and Alan was a cow. We had a costume contest and awarded these very cool trophies. The tall one was for first place, which was won by the woman dressed as Frida Kahlo. (Her name is Tamsen and she is named for Tamsen Donner of the Donner Party! How could she not win?!). The second prize of the Dog Buddha was won by a couple dr 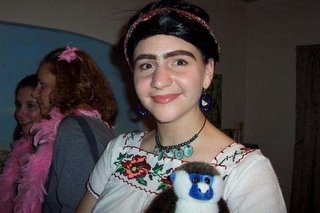 essed as Shrek and his wife. 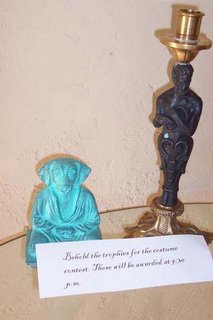 Email ThisBlogThis!Share to TwitterShare to FacebookShare to Pinterest
Labels: Halloween

Hi there, I am out searching for info on and found your site. I'm a fan of all crafts including and enjoyed your post. Good job.